Nail your story to the wall 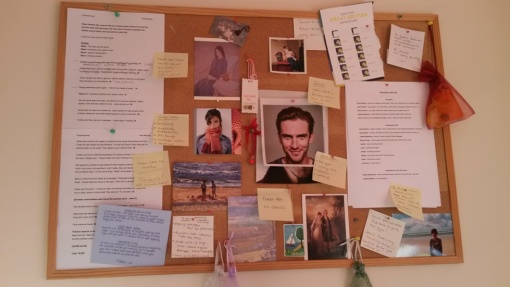 Today, I am officially two-thirds of the way through the first draft of my new novel, Pressmennan. I’m celebrating by killing off one of the characters – and posting a picture of my office pinboard.

When I began writing Pressmennan, other than a few scribbles in my notebook, the only thing I had to help me keep track of my characters and their actions was the Excel spreadsheet I mentioned in a previous post.

As the manuscript has grown, it’s become harder to keep hold of everything, and I decided to create a pinboard so I could see it all at a glance.

I put up a list of characters and a summary of the action still to come. There are sticky yellow notes to remind me of things I might forget to sort out or add in, pictures representing my central characters, and postcards and other keepsakes that illustrate key elements of their story.

It’s a complete visual representation of my novel and has made a huge difference. If you’re working on a major writing project, why not make one too? I just hope I’ve made the resolution low enough on mine so it doesn’t turn into one gigantic spoiler.

And the death? I’m saying no more about it.

Alex Morgan is the author of Tandem, winner of the Hookline Novel Competition 2013. Tandem is about love, loss, a celebrity penguin – and riding a bicycle built for two. She is working on her second novel.
View all posts by Alex Morgan →